Secret societies have always been fascinating to us ever since we were kids and read Enid Blyton’s The Secret Seven series for the first time. The allure of secret societies perhaps lies in the veil that surrounds any information about it, which is also why most people are drawn to novels and movies about espionage. The idea of secret societies has been romanticized quite often in reality, and has been borrowed to create exclusive members only clubs and other secret communities.

If you are interested in knowing about unknown underground secret societies in detail, drop that Dan Brown thriller and look no further because the top ten ones are listed below.

This is perhaps one of the most ancient and still functional secret societies in the world. Founded in the 14th century, this secret society still preserves its primitive and naturally regressive laws when admitting new members into the fraternity. Since it is a global brotherhood, new members are taken in and supervised at the basic regional level of the Lodge. Freemasonry is steeped in ritualism and other secretive initiatory practices. The group has been criticized for being anti-religious or cultic in its approach, but in reality it has its own set of guiding principles and a belief in an Ultimate Being.

Founded in 1832, the Skull and Bones is the most major and historically significant secret society of senior students and alumni at Yale University. So much so, that over time it has gathered mythic associations. The Skull and Bones members have been subject to several controversies for offering membership to the elite and being highly exclusionary. It has also been rumoured that this society builds a network of highly ranked and well placed Yale graduates to achieve its aim of global domination. Major figures such as USA President Bush continue to be members of this society, and have always remained highly secretive upon the subject. 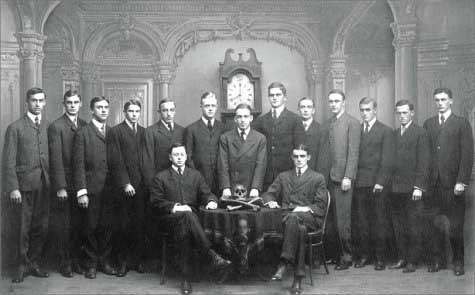 8. Order of the Star Spangled Banner

This society was created in 1849 as an oath-bound institution in New York that had very regressive notions about citizenry and immigration. It is known that the society was established to combat the rising rates of immigration in the USA and the influx of Catholicism. The group was much looked down upon as it was central to several political scandals created as a result of their extreme views on matters. However their secrets were mainly considered as gross sensationalism rather than being of actual value.

The Fox Club is one of the most elite and lesser known clubs of Harvard University. Established in 1898, its membership extends to both graduate students and alumni, including highly notable personages such as T. S. Eliot. At present it is no longer recognized as an official society of the university but it continues to admit only male students and alumni.

This is a brotherhood that was created in the 1960s but is now mostly considered to have been effectively dissolved. Religiously and politically subversive in nature, this group is supposed to hold a secret text at the core of its brotherhood that unlocks certain mysteries of the universe. In today’s popular culture and investigative journalism, the Priory of Sion is mainly presented as a fictitious organization that has no basis in reality. However in major books like The Holy Blood and the Holy Grail certain proofs have been gathered and presented to establish its authenticity.

The actual purpose and dealings of this group is highly speculative in nature because all known information about it is highly sensitive. Historians and scholars have suggested that this society was the real cause of Nazism in Germany. Hitler himself is known to have been closely associated with this order which has been known for believing in racial supremacy, dominance through slaughter, and control of humankind. This society has also been known to practice certain sorts of black magic and racial chants as a part of its ritualism.

Ashoka, the ruler of India’s Maurya Dynasty, is credited with the formation of this secret order that is said to be operative to this day and in charge of some of the most highly sought after information of the world. These nine members were all given the responsibility of researching and continuously updating all systems of knowledge in their respective fields. The books that were produced, which are believed to still exist in the modern world, are said to contain pathbreaking information in the fields of psychological warfare, human physiology, metallurgy, and the science of time travel.

The Illuminati are one of the most ancient secret societies who believed in the basic principle of illumination or enlightenment through the power of reason. This society housed the social and intellectual elites of the world and protected their secrets by communicating only through codes and ciphers. However this society became highly controversial in nature following the involvement of their members in major politically subversive occurrences of the day. Modern day conspiracy theorists suggest that the movements of the Illuminati can also be traced in later events such as the French Revolution.

The organization is named after the Hotel de Bilderberg in the Netherlands where the first meeting of this society was held. The nature of this society is unique because while it is not exactly a secret as it involved major figures like Bill Clinton and Margaret Thatcher, the proceedings of this society is completely unknown. The general public does not get to know when it will convene, the minutes of the meetings are not recorded, and journalists yet have not been able to get hold of what actually takes place. It is only speculated that this group meets to discuss matters of absolute urgency and national security.

The Eucleian Society was functional in New York University as a student’s literacy society that hosted long talks and debates and in which membership was highly selective and secretive. Major literary figures like Edgar Allen Poe have been associated with it. However there have been certain noted occurrences such as invitations for joining sent to certain highly ranked students of the university in recent times. This suggests that the society may be functional again and keeping its nature of operation a secret.

The main issue with secret societies is that their activities are kept under the wraps always and it is difficult to determine whether or not any information known about them is concrete. As such, most records of the happenings of such societies are unverifiable. Because certain societies have been referred to in movies and books so often, they have also been fictionalized to a great degree. However this only serves the purpose of their societies as their location and existence become more of a secret with passing days and the circulation of wrong information.